Reflector and 13 other stories from Finnish sidewalks

A family of three lives in windswept southern Helsinki. In the mornings, the father walks his son to a French school and wonders why even adults adorn themselves with swinging accessories that glitter in the headlights. He contemplates the necessity of the things – are the Finns just prissy? Dark November descends and he begins to see the light.
Reflector tells 14 stories of making a home and feeling homeless in a new country. The protagonist is a writer who enjoys a comfortable life, sipping coffee – and often something stronger – in Helsinki’s cafes and bars. Through the windows, his gaze captures the locals yet sometimes fails to grasp them. Occasionally he leaves behind the silence of this desolate land to catch a breath of fresh air in Estonia, where he helps old friends with a variety of predicaments.
Like an episodic novel, this collection of short stories explores work and idleness, cultural differences and similarities, and the fact that sparkling wine can cost next to nothing while the prices of designer reflectors are crazy. But the wry, piercing reflections, often made along Finnish sidewalks, never stop.
The book is published in English and in Finnish. The Finnish edition is called Heijastin ja 13 muuta tarinaa suomalaisilta jalkakäytäviltä.

Howard Shernoff (b. 1966) is an American author who has lived in Europe and Russia for much of his life and has become acquainted with the streets of southern Helsinki over the course of many years. 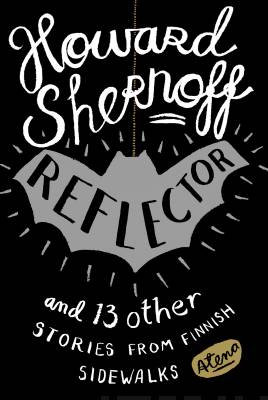